We started our second day in the capital with some Museums. First the The "Museo del Arte Contemporaneo" where we saw a few interesting exhibitions and the "Museo del Bellas Artes" with an exhibition from Norton Maza (http://www.nortonmaza.com/) that struck us for its originality and creativity (see video at the bottom). 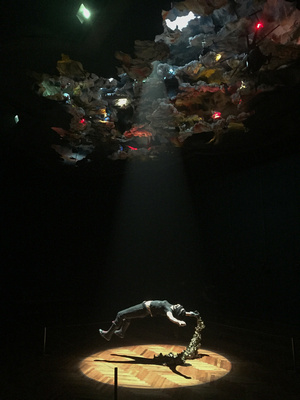 There was an organic market outside the museum that attracted Laurence like a bee from honey. We spent a bit of time there and headed towards the Plaza de Armas, which is the central square from the city. It is a very nice square surrounded by the cathedral and the "usual" conquistadores statues. We then walked to the "Museo Chileno de Arte Precolombino". We were fascinated by the numerous native civilisation and the sophistication of their craftsmanship. From there, we took a cab (or rather tried to...) to the funicular that is leading up to Cerro San Cristobal, the famous hill were the big virgin Mary statue sits. For whatever reason, the taxi led us to the wrong entrance (the entrance for cars) which was about 3km from the base of the funicular. We then decided to use our feet and walked about 1h and 30min up the hill. This was a good hike (not very well signed) with about 300m uphill where we met a new Zealander that was travelling around the globe. When we arrived, we had only one wish, which was to seat on the steps below this imposant statue. There were a lot of worshippers going up the hill on that day (we were on Easter Sunday) and we realised later that it was a very good choice to hike up because of the long queue to access the funicular. 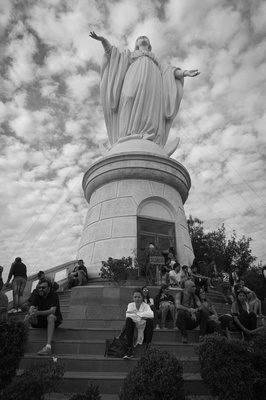